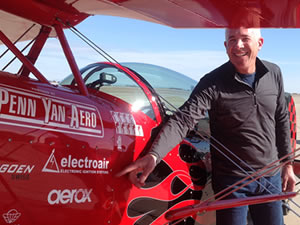 From Spender Suderman
New Flat Spin World Record:
First flight: May 10, 1995 Airshow performer Spencer Suderman sets a new world record with an 81-turn, three-minute-plus inverted flat spin in a Pitts S-2B that took him from 23,000 feet to less than 2,000 feet over the California desert. Suderman credits ElectroAir, a Michigan firm that makes an FAA-certified, variable-timing, electronic ignition system for his success. "Nothing on that airplane works as well at 23,000 feet as it does down low," he said. "But it still had some climb left at 23,000." Suderman is helping ElectroAir collect engine data for FAA certification in six-cylinder Lycoming engines. The units are FAA certified in Continental and Lycoming four-cylinder engines as well as some Continental six-cylinder models. It took about 30 minutes for Suderman to climb to 23,000 feet. The spin recovery initiated at 2,000 feet was no different after 81 turns than it is after just a few, he said. 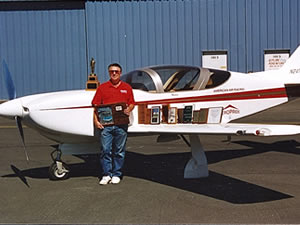 Jason Newberg of Edgewater Florida took on an incomplete Pitts S-1 project, finished it and flew it 2800 miles to Reno, Nevada for a first place win in the Silver Class at the 2006 Reno Air Race. First, Jason had to complete the airplane and fly-off the requisite 40 hours of Phase I experimental flight time. His modifications included 11:1 cylinders and an Electroair Model EIS-1 electronic ignition system in place of the right magneto on his stock Lycoming 4 cylinder engine. Competing against highly modified airplanes and experienced pilots, Jason worked his way from a 5th place start in his initial qualifying heat to starting second in the final. After that it was no contest as Jason’s Pitts quickly took the lead and remained in first place for the Silver Class win at 189.657mph. Jason credits the Electroair electronic ignition systems reliability and strong performance for his win. Jason has competed in IAC Aerobatic Championships Advanced and Unlimited at the National and World Levels. Jason has flown many aerobatic aircraft including Pitts Special's, Yak's, Sukhoi's, Giles and Extra's. He currently flies the Extra 300S and the Pitts. Jason has trained and been mentored by Aviation Greats such as Clint McHenry, Phil Knight, Nikolay Timofeev, Michael Goulian and Bulldog Jim Leroy. Jason currently flies the Extra 300S in Unlimited Competition and the Pitts in the Reno Air Races. Congratulations Jason on a Great Win!